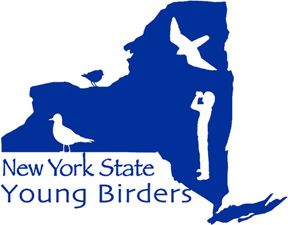 The New York State Young Birders Club (NYSYBC) is coming up on its fourth anniversary this year. Two of our original members, Hope Batcheller and Erich Lehner, recently “aged out” (at the ripe old age of 20) and became Supporting Adult Members. By next fall seven of the eight Charter Members will be in college. The kids grow up and leave the nest! But empty nest syndrome will not be setting in at NYSYBC because there are still 29 Youth Members and half of them are under 15.

NYSYBC’s young birders are truly exceptional kids, and not just because they’re birders. Every one of them is a delight, and I could tell you great things about all of them, but there’s not enough space here. So I’ll limit this article to some of the most notable achievements.

Hope Batcheller, age 20: Hope is attending Cornell University and has worked in both Canada and Chile on Hudsonian Godwits. She was recently elected president of the Birding Club at Cornell. In March she went on a recording expedition to the Mojave Desert for the Cornell Lab of Ornithology. Hope will captain the Cornell Redheads team at the World Series of Birding (WSB) this year.

Eamon Corbett, age 16: Eamon was selected last year to be one of the editors of the American Birding Association’s blog for young birders (The Eyrie). Also last year Eamon won one of three gold medals in the New York State Sci- ence Olympiad, specifically in the ornithology event. He is a finalist for the American Museum of Natural History’s Young Naturalist Award in the 11th grade division for his essay, “The Impact of Invasive Tree Species on Bird Populations in a Northeastern Urban Park.”

Jacob Drucker (age 19) and Lila Fried (age 18): Jacob and Lila did a study on primary feather projections in austral migrants, taking measure- ments of specimens in the American Museum of Natural History’s vast collection of bird skins. Jacob presented the study at the New York State Ornithological Association’s (NYSOA) annual meeting in September 2011. Alexander Gottdiener, age 15: Alexander is one of eight (out of 1000) 9th grade division finalists for the American Museum of Natural History’s Young Naturalist Awards for his essay, “A Study of Predator Avoid- ance Behavior in Birds.”

Nathaniel Hernandez, age 17: Although he lives in New Jersey, Nathaniel is an avid member of NYSYBC. Last year he spearheaded the effort to create a similar statewide YBC in NJ. He is President of NJYBC, maintains its website, and does much of the work to keep the club going with field trips and meetings. Nathaniel is involved in various bird research projects, including banding, grassland bird surveys, and tracking radio-tagged Bald Eagles. He is an enthusiastic writer about birds also, contributing to the Cornell Lab’s Neotropical Birds species accounts at neotropical.birds.cornell.edu.

Be sure to check out the NYSYBC website, where you will find a new “Hall of Fame” page showing club officers and holders of other luminary positions since 2009, plus the NYSYBC teams that have competed in the Superbowl of Birding and the WSB. You’ll also find links to several young birders’ websites/blogs, field trip reports, photography, and artwork. The WSB is on May 12, and the NYSYBC will have two teams in the Youth Division again this year. This event is the club’s biggest fundraising activity and all WSB donations go to the Education/Scholarship Fund. You can donate online at nysyoungbirders.org. The young birders and their parents are grateful to the generous Supporting Adult Members and Partner Clubs, as well as to the adult advisors who donate their time and work. If you agree that it’s important to encourage youngsters to become life-long birders and conservationists, please consider becoming a Supporting Adult member and seize the opportunity to see our young birders in action on a field trip
Posted by Paul Anderson at 5:48 PM